skip to main | skip to sidebar
"Let the beauty we love be what we do." Rumi

Old timey things seem romantic, but as I recall travel used to be more leisurely, more of an 'event' in itself, and not just a way to get somewhere...I wanted to capture the pleasure of traveling more slowly than we do today in this small work.  I have been having fun learning to use my new oil paints and this is my first one.  It is 4" x 6" and framed in a simple gold frame.  I will be entering it in the Gallery North Miniatures Show in Edmonds Washington during the month of March.
Posted by Barbara Mearing at 12:12 PM No comments:

More than 6 months since my last entry!  After the fun and excitement of being shown at Raven Rocks, I began to get ready for entering a few shows...Edmonds Art Festival,  ASW show and others.  Entering in many festivals and shows all over the northern Puget Sound Area was lots of fun, but challenging to keep up with so many deadlines.  So I was delighted to be invited to join the Whidbey Art Gallery in Langley!  I juried in my pastels and my miniatures and became a member July 1st.

Much to my surprise, at the end of July I was asked to join the Artworks Gallery in Greenbank!  Again, I juried my pastels, becoming a member the 1st of October.

Events have followed -- having my acrylics at Whidbey General Hospital in November and showing in the Artists of South Whidbey Winter Galleria in December.  I had taken a number of workshops in the summer, took on a very large house project and with the usual summer guests, it was a busy time.

2012!  And so begins my 4th year of being an artist!  I look forward to a great year of painting,
Look for my new website: www.barbaramearing.com.

Happy New Year to all.
Posted by Barbara Mearing at 10:17 PM No comments:

Exciting News!!  Raven Rocks Gallery is featuring my pastel work for the months of May and June 2011  The pictures showing are 'Tenacity', 'The Gentlest Rain', 'Whidbey Shadows',  ''The Blue Watering Can', 'Gages Whidbey Barn' and ' Easy Living on Whidbey'.  Many thanks to Raven Rocks owners Windwalker and Mary Jo.  Their gallery in Greenbank, Washington is definitely always worth a visit and - in my point of view - especially now!!
Posted by Barbara Mearing at 10:45 AM No comments: 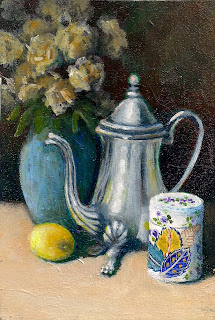 The traditional 'tobacco leaf' pattern on the old china tea caddy got my attention for it's lovely color scheme. Posing it with a sunshiny lemon and soft yellow roses in a blue vase seemed just the thing.  This painting is acrylic, 5 x 3.5 inches.   Miniatures are such fun to paint! This one SOLD at the Park Lane Gallery Annual Miniatures Show in Kirkland, Washington.
Posted by Barbara Mearing at 10:22 PM 1 comment: 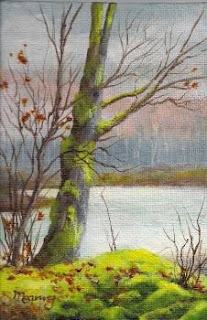 You are invited to the Artist's Reception at Gallery North in Edmonds on Sunday, March 6th from 1 to 4pm.  I have 6 works entered: Autumn on the Snohomish, Rattatouille, Grammy's Cat, Early Snow, Alder Grove and Summer Shade.  These plus a few small works are my most recent blog posts here.  Check them out, or better yet take a look at the real thing and visit me on the 6th.
Posted by Barbara Mearing at 9:23 PM No comments: 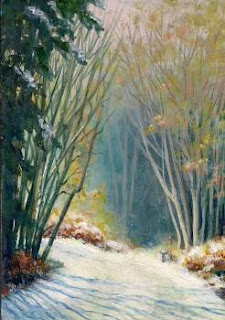 Our February snow reminded me of the last snow in November...the leaves were late falling and I came upon this pretty scene just down the road.  I took a snap and have painted an acrylic 3.5 x 5" miniature.  I love that there is so much beauty just around the corner from my home...it is all about seeing it.﻿  I will be entering it in the Miniatures show at Gallery North in Edmonds in March.
Posted by Barbara Mearing at 3:47 PM 1 comment: 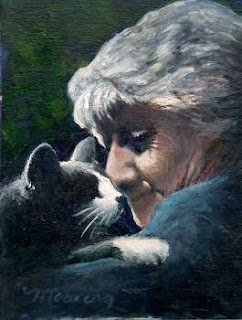 How we love our pets!  Grammy and her cat... sadly, I don't know the kitty's name, but she looks just like my own little Daisy.  This was painted from an old black and white photo, is in acrylic and is 3.5" x 5".  It is available at the Whidbey Art Gallery in Langley, Washington.
Posted by Barbara Mearing at 10:42 PM 1 comment: 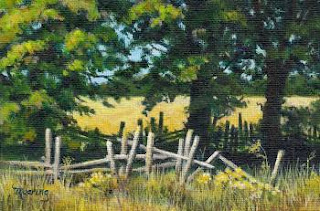 We love the heat of summer and paradoxically, the cool, refreshing shade of large trees.  I painted this in Winthrop in Eastern Washington State.  The trees and hayfields were large --from one edge of my field of view to the other in all directions, but captured in a 4" x 6" acrylic miniature.  This little treasure was SOLD at the Whidbey Art Gallery in Langley, Washington
Posted by Barbara Mearing at 10:02 PM No comments: 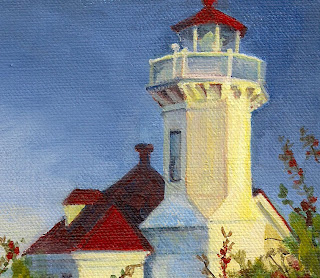 Moving the lighthouse? Well, sort of.  This small painting is moving to a new home on Whidbey.  It was SOLD at the Holiday Lites show at a great gallery/coffee house, Timbuktu Java Bar in Freeland, Washington.  You can see the painting's back story on my 11/29/10 blog 'Light on Light'.
Posted by Barbara Mearing at 10:58 PM No comments:

It is 2011!  And I am still here.   But why no posts for a while?
In January 2009 I decided to be a serious amateur painter and started with taking a painting class...
In January 2010 I realized and that since my picture hanging spaces had run out, (1) I needed to get serious about showing and selling...of course all the time keeping up the painting and in aid of that, (2) I really needed to step up to technology. So I opened this blog.  What a year it was!!
So here it is 2011 and time for reflections. The main thing I have learned is that time is the issue.  No surprise there.   We all have 24/7, but it is no secret that some folks get a lot more done than others without apparently sacrificing anything important.  I know of very few ways to speed up the right brain stuff (sans mind altering chemicals), although if anyone does please let me know.  So it has to be the other parts:  technology and information have to work harder for me.  I have arranged for young college student friend to teach me Facebook,  I have borrowed a DVD on running my new (used) Nikon and bought a dummie's type book about Photoshop.  I trust that the learning curve will not exceed the time gained.
So I look forward to efficiency in technology and more happy days painting... I should be posting again soon.
Hey, if we don't have dreams what are we?
Posted by Barbara Mearing at 12:36 PM No comments: